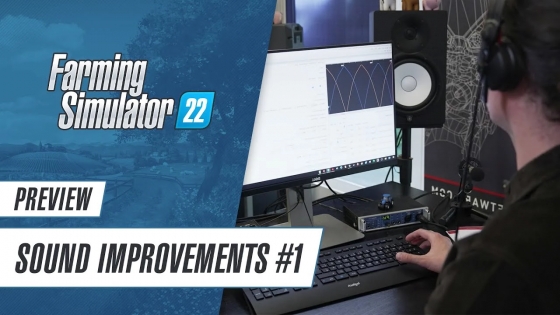 Farming Simulator 22 will feature various sound improvements. You can already listen to some of them in the videos below. Our two sound designers, Kris and Nils, present to you what they’ve been working on to improve the auditory experience in the game. Grab your headphones and start listening!

The main new feature of the audio system is the implementation of dynamic load processing: It simulates the engine having various loads and resistances applied. Whether you drive a tractor under a huge load or drive uphill, the engine will sound more authentic. To achieve this, the sound team used real-life recordings from real machines.

Nils is working on the new attachment audio system. Since attachments like cultivators and trailers create a lot of different sounds, the audio team visited a lot of local farmers to create references. The new audio tool allows playing various sounds during an animation.

The unloading of a trailer, for example – with the rear lid opening, hydraulic parts moving around and metal impact where metal on metal creates a heavy sound effect. Every attachment will have its individual set of sound effects in Farming Simulator 22.

Another thing, you’ll notice while driving your tractor: there are plenty of new sounds inside the cabin, creating an immersive sound environment. You don’t just hear the engine of your tractor, but various shaking and rattling sounds from all the objects inside the cabin. That includes the sounds of windshield wipers, too!