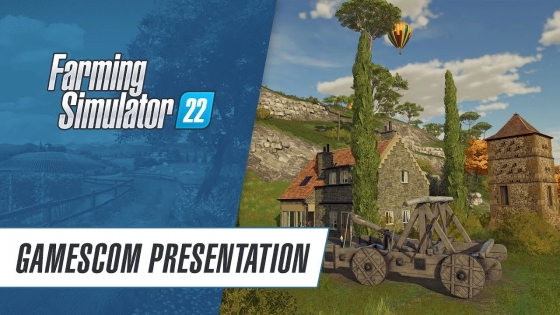 Last Friday, we showed you more of Farming Simulator 22 in our gamescom stream. Did you miss it? No worry, watch the recording below!

Brand-new gameplay scenes from FS22!
You already got to know Elmcreek, our Midwestern US map in Farming Simulator 22. Erlengrat will be back, too. The third map was still to be revealed, and now it’s time to take a closer look at Haut-Beyleron. Inspired by the Mediterranean region in Europe, some of you already guessed right about the country it’s set in. We show you new gameplay scenes and some new features in the video below.

Watch the first gameplay trailer!
The first trailer of Farming Simulator 22 set the mood for the new installment of the series: Our cinematic trailer showed father and daughter working the field together, rewarded by delicious grapes after some challenges that come with the profession of farming. If you want to know how it was made, there’s a Making Of, too.
For gamescom, we have the very first gameplay trailer prepared, showing you actual scenes from the game. If you haven’t seen it yet, watch it below!

Stay tuned – pre-order to get your bonus!
Farming Simulator 22 will release on November 22nd for PC, Mac, PS5, Xbox Series X/S, PS4, Xbox One and Stadia. Pre-order now to receive the CLAAS XERION SADDLE TRAC Pack for free!
Also available now: The Year 1 Season Pass. Get new content for Farming Simulator 22 and save money! On top of the price advantage of the Season Pass compared to buying the content separately, you’ll save even more money by pre-ordering.